This is a letter from Al Huntley, another friend from Trumbull.  The letter was written in pencil and is so faded, the writing barely shows up on a copy.  I will scan it so that you can see the United States Army Air Forces logo at the top of the stationary.  The return address on the envelope is Sheppard Field in Texas.  It was postmarked in Wichita Falls, Texas.

I wonder if this is the Al Huntley who became a History teacher and was at Trumbull High School when I went there? 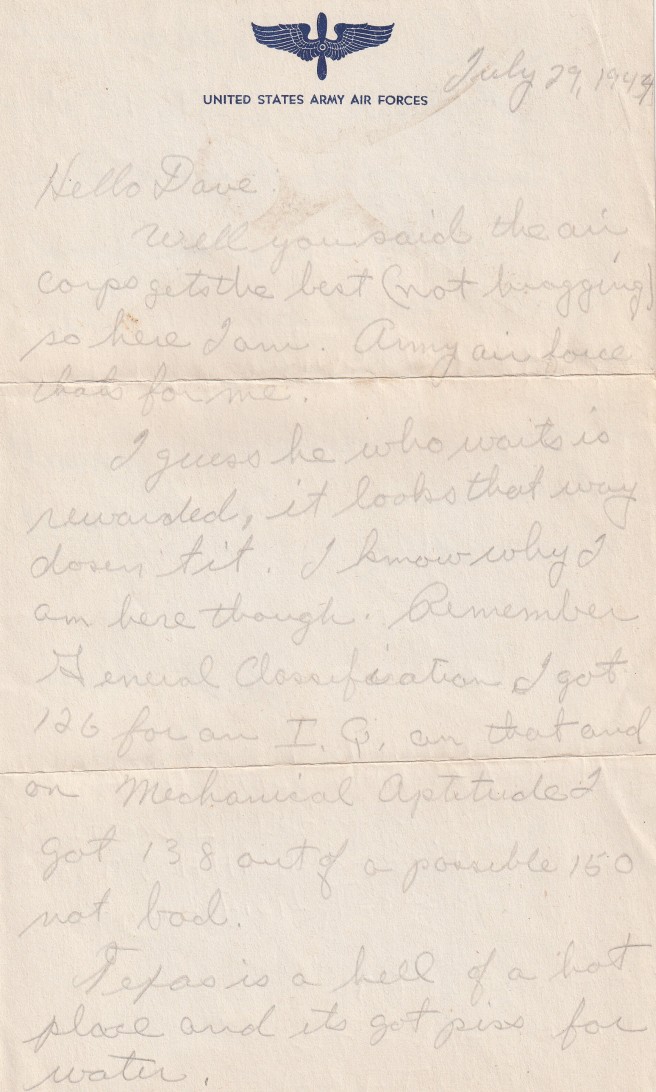 Well you said the air corps gets the best (not bragging) so here I am.  Army Air Force, that’s for me.

I guess he who waits is rewarded, it looks that way, doesn’t it.  I know why I am here though.  Remember General  Classification. I got 126 for an I.Q. on that and…

In my previous entry I got as far as Seattle in my travels at age 22.

She asked the Head of Department at U Washington what had happened to her application – he had mislaid it!!  On such action her life path hinged.  One wonders what would have happened if …………..

He asked what she was doing then  and she  explained that she was just traveling and looking for a job.  He suggested she contact John Nordmark at Puget Planners.  And that’s what she did.  She was offered a position.  She can’t remember the title – Research Planner?  Anyhow when she queried her salary she was told that despite her qualifications she would be paid the same as the female secretary.   Those were the times…….

She accepted the conditions and it was agreed that she would start in 3 weeks time, after she had gone back East to collect her belongings.  It was exciting to have the prospect of a job doing urban planning research in Seattle!

Her friend Rachel helped her find accommodation.  Rachel knew of 2 teachers living in Magnolia looking for a third.  She was interviewed and accepted to live with Jody and Mary Ann.  She could travel by bus to work at Puget Planners on Dexter.

She boarded a Greyhound bus to travel back to Boston.  It helped to make her realize just how big this country is.  And this was before the Interstates.  By the time she finally reached Boston she was beginning to regret the plan.  Did she really want to return to Seattle?