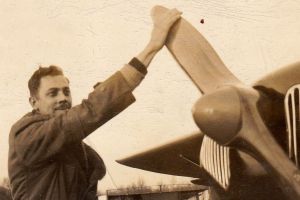 Ced surprised us by writing another letter which arrived within a week of the last. He mentions first that the Buick repair job is about completed and at a ,total cost of about $300, plus labor, which he generously donated himself, including a practically new engine, transmission, brakes, etc. which he estimates will make the old boat give service for about two years more, at least. He made another ski trip to Independence Mine, finishing up by skiing all the way downhill to Fish Hook.

He says: “I saw some prints from original negatives found on a Jap soldier in the Aleutians. The scenes were quite like any an American soldier might have, except that the subjects were all Japanese. There were views of buddies all smiling at the camera, Jap planes on the beach, some on skis, etc. No doubt most of them…