The Allies also established the United Nations War Crimes Commission (the UNWCC) in 1943.  The UNWCC collected evidence on Axis war crimes and drew up lists of suspected war criminals for Allied prosecution after the war.  In 1944, a sub-commission of the UNWCC was established in Chungking to focus on the investigation of Japanese atrocities.

The major trials being held in Tokyo were presided by the U.S., Britain, Australia, the Netherlands, France, China and the Philippines and began in May 1946. General MacArthur, as supreme commander of the Allied powers, largely controlled the progress of the trials. They started with 25 defendants, but two passed away during the proceedings and another was evaluated as too mentally deficient to participate. 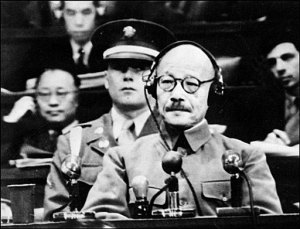 I came across the materials & chart packs for these cute little gingerbread mice figures from Just Nan recently – Santa mouse, Jingle mouse and Angel mouse. They are so sweet, and very unusual!

I thought they’d look good with the Victoria Sampler buildings that I have previously stitched, and which I display under my tree at Christmas.

I bought the charts from Create Nostalgia, an online shop in Flintshire, for £12.95 for each chart, which included the accessories needed, but no fabric or threads. I chose some fabric from Peakside Needleworks.co.uk of Glossop – a small piece of 32 count Weeks Dye Works “Straw” colour fabric 1/16 size of a metre,  9 inch x 13.5 inch, which cost £5, and was enough to make all three mice (they are very small!). The threads I picked from my stash – only small amounts were needed of each colour, so…